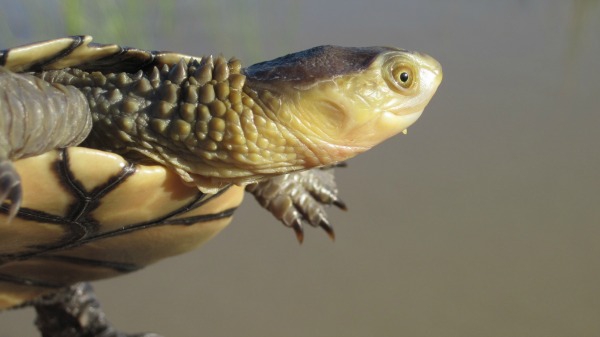 UWA researchers and their collaborators have been developing a suite of methods to identify sites for assisted colonisation that will give the tortoises the best chance of long-term survival in the wild.

Assisted colonisation is a type of translocation when a species is established outside its historical range because there is a recognised threat—such as climate change or disease—which could mean populations in its native range may get into trouble.

The endangered reptile is native to two tiny nature reserves in WA, which are getting drier and hotter, and according to habitat modelling, without remedial actions these marginal habitat fragments are in danger of becoming unsuitable as early as 2050.

Under dry conditions, the animals cannot forage in the swamps for as long as they need to, and thus don’t breed as well either, University of Western Australia researcher Dr Nicki Mitchell says.

The western swamp tortoise’s eggs require soil temperature of less than 34oC once laid in order to survive.

They also need warm temperatures to allow normal development and maturation, and later cooler temperatures to trigger hatching before the egg’s energy supply is depleted.

“We used a ‘mechanistic’ model to predict how nest temperature varies with climate, locality and soil properties such as reflectance, and screened thousands of sites in the south west of Australia for suitability,” Dr Mitchell says.

By simulating realistic nest choice scenarios under current climates and future projected climates, a number of regions were found that were ideal for the survival of turtle embryos.

The research also suggested that females in more southern parts of the state should ideally dig nests at depths of 7–15 cm, in sunny areas that do not flood prematurely.

Alongside this newly-published work predicting the survival of the embryonic stages of the species, the Department of Parks and Wildlife is considering a trial release of captive bred juveniles from Perth Zoo into two of the proposed sites.

Dr Mitchell says the juveniles will be closely monitored to assess how they adapt to the new environment, including measuring how rapidly they grow in a cooler climate compared to turtles living in the existing habitats.

Collaborative work on the western swamp tortoise has been taking place for 20 years between UWA, the Department of Parks and Wildlife (DPaW) and the Perth Zoo, and more recently with the University of Melbourne.

Western Swamp Turtles begin to breed at around 9–15 years of age, depending on size. They usually lay 2–5 eggs at a time in a clutch, and may lay a second clutch if more food is available.

They are currently listed as Critically Endangered as there are fewer than 50 breeding adults in the wild.

Assisted colonisation is an out of range introduction for conservation purposes, as defined by the International Union for the Conservation of Nature (IUCN).

This article ‘Modelling picks out prospective homes for rare tortoises‘ was originally published in Science Network WA on 13 July 2016.