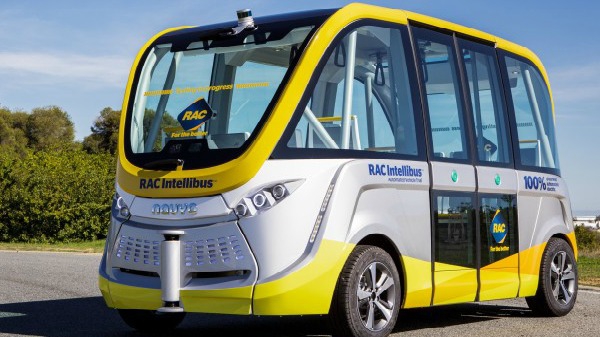 The RAC Intellibus™ is an autonomous, driverless, electric vehicle. Developed by French company NAVYA, it carries 11 passengers and reaches speeds of 45 km/hr.

RAC Executive General Manager Pat Walker says the trial is to understand how we can safely transition autonomous vehicles into the transport mix on our public roads in Australia.

From April 2016, Stage One saw the vehicle tested on a private track to observe it in automatic mode and in simulated traffic conditions. During Stage Two, the shuttle moved to open roads to commission and verify the route.

In Stage Three, the shuttlebus is running along the Esplanade from the Old Mill to Sir James Mitchell Park for the next three months, providing free rides for the public.

With a RAC chaperone onboard at all times, this stage is testing increasingly complex traffic conditions such as levels of interaction with different types of road users, traffic signs, traffic lights, right turn manoeuvres, and traffic flows.

Given that nearly 90 per cent of crashes involve human error, the RAC hope the RAC Intellibus™ will have a positive impact on road safety, potentially leading to a significant reduction in the $5 million cost of road trauma in WA per day as well as fewer cars on the roads, cutting congestion.

“This is also a great opportunity for people with disabilities – visually impaired, older motorists and also younger children – to give them far more autonomy in terms of their mobility options,” Mr Walker says.

He says there is much research and further development that will need to occur as well as understanding public policy considerations, regulatory frameworks and insurance.

Fully driverless vehicles will be available in Australia and will be at affordable prices as early as 2020.

“The world and technology is moving rapidly and what we need to understand is how we can safely transition the new driverless technology into our mainstream transport networks.”RAC Intellibus™ details

The RAC Intellibus™ uses LIDAR (Light Detection and Ranging) which uses ultraviolet light to detect and avoid objects and measure distance and build a map of the environment.

Stereovision cameras are used to ‘see’ traffic lights, vehicles and other objects, while GPS provides a precise location of the car. Motion sensors estimate the vehicle’s position relative to its starting location with autonomous emergency braking applied automatically if an imminent collision is sensed.